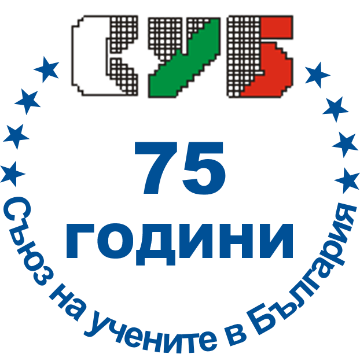 On October 30, 2019, a solemn meeting dedicated to the 75th anniversary of the Union of Scientists in Bulgaria was held in the Great hall of the Sofia Capital Municipality.  The meeting was opened by the Chairman of the USB – Professor. Diana Petkova. There was a musical greeting from Ph.d. in Pedagogy Milena Velikova – Sofia University “St. Kliment Ohridski“.
Professor Diana Petkova delivered a solemn speech. Тhe  Union of Scientists in Bulgaria was created on October 30, 1944. Professor  Petkova stressed that on the eve of the  Day of the National Revival Leaders, November 1, – the brightest Bulgarian holiday, we gratefully remember the scientists who contributed to the creation and development of the USB, such as Acad. Asen Hadjiolov, Prof. George Pavlov, Acad. Kirill Bratanov, Acad. Lyubomir Iliev, Cor. Member Alexander Yankov, Prof. Ivan Matev and others; with a great contribution to the development of the Union these days is Acad. Damian Damyanov, who was Chairman of USB from 1998 to 2015.
The President of the Republic of Bulgaria, Mr. Rumen Radev, delivered a welcoming speech in which he said that the Union of Scientists in Bulgaria is an expression of the age-old desire of the Bulgarian people for education. He noted that the Union has set high standards and morality in science as a norm. The Union is a model of all Bulgarian scientific institutions, serving loyally and responsibly to the nation through science and education, creating a democratic society. Its activities are the basis of the Bulgarian economy.  The Union enjoys great prestige abroad. The President finished his speech with “Happy holiday and good luck!”. 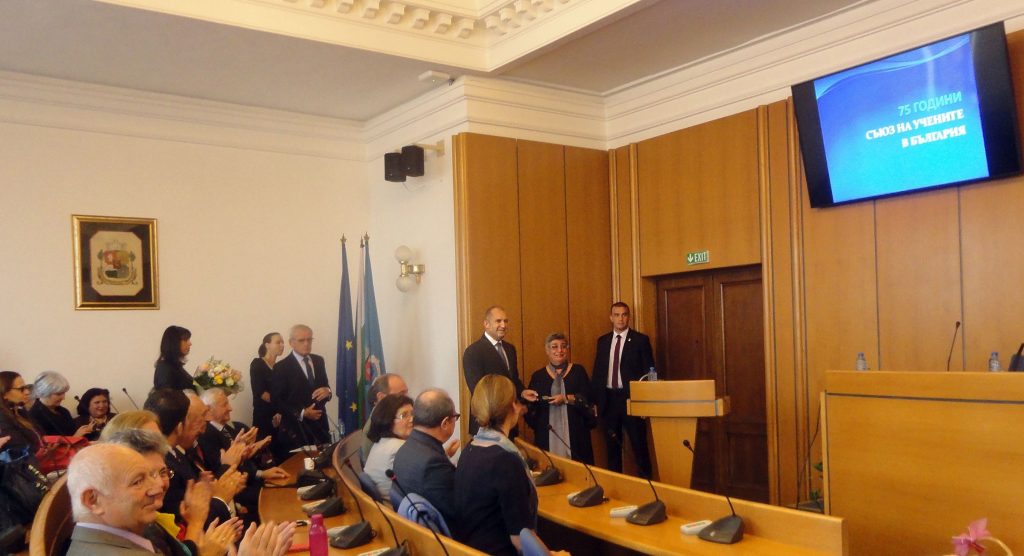 Head of state Rumen Radev presented the badge of honor to the President of the Republic of Bulgaria tо the Chairman of the Union of Scientists of Bulgaria Prof. Diana Petkova on the occasion of the 75th anniversary of the Union and the overall contribution of the organization to the development of science and education in our country. Prof. Diana Petkova thanked for the award.
Official congratulations were served. The congratulatory address from the Minister of education and science Krasimir Vylchev was read by the Deputy-Minister of education and science Mrs. Karina Angelieva. She expressed satisfaction that a female researcher was chair of the Union and stressed that her first paper had been published in the journal NAUKA (Science), a bi-monthly journal of  the Union of Scientists in Bulgaria. Mrs. K. Angelieva thanked the Executive Secretary of the journal Penka Lazarova for her work and professionalism at the publication of  the issue of “NAUKA”.
The Chairman of the Bulgarian Academy of Sciences Acad. Julian Revalski delivered the welcome word. He noted that  USB is the main partner of the BAS in good and bad times in close cooperation with higher schools. The main priority of BAS and the Union is the task  science and education to go together.
In his speech, the Chairman of the Agricultural Academy Prof. Martin Babov stressed that one of the main tasks of Bulgarian scientists is the protection of the environment, which should be paid attention to the development of Biology.
Congratulatory addresses of Rectors of  higher Schools and others were also read.
The famous historian Nikolay Poppetrov (Institute of historical research – BAS) pronounced the word “Union of Scientists in Bulgaria – Science and Society”. In his report, N. Poppetrov traced the history of the creation and development of the Union, emphasizing its leading role in the promotion of scientific knowledge. The great achievement of the Union is the establishment of Sections and Branches throughout the country. The successful development of the technical, medical and military Sections as well as the tourism section was noted. N. Poppetrov stressed the great importance of the journal “NAUKA”. He also highlighted the role of the Ethics Commission at the Union, which in 2014-2017, under the leadership of its Chairman – Cor. Member  Maria Popova, initiated four scientific conferences and published a book on Plagiarism in Science as Pseudoscience.
After the speech of N. Poppetrov  distinctions from the Competition’ 2019 of the Union of Scientists of Bulgaria were awarded.
At the end of the meeting, the following Honorary members of the Union, who received the Certificate of Honor and the USB badge, were announced: Acad. Damian Damyanov, Acad. Yachko Ivanov, Prof. Nikolina Ognenska and Cor. Member Maria Popova.
Solemn meeting on the occasion of the 75th anniversary of the creation of the Union of Scientists in Bulgaria, held on October 30, 2019  in the Sofia Capital Municipality, was the unforgettable event on the occasion of the anniversary of the Union. 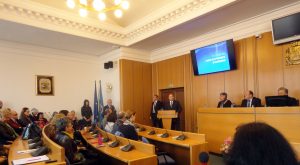 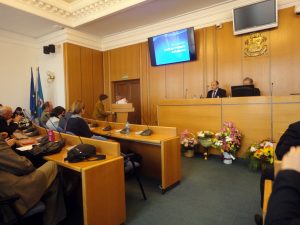 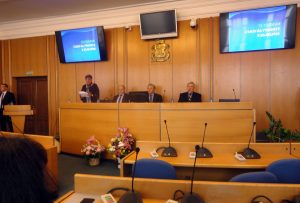 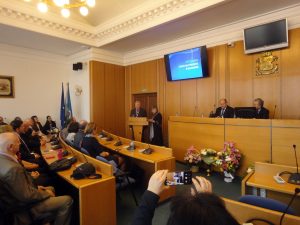 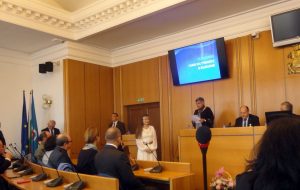 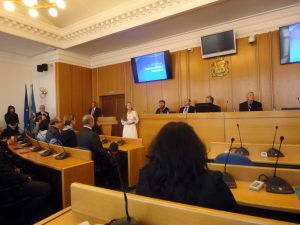 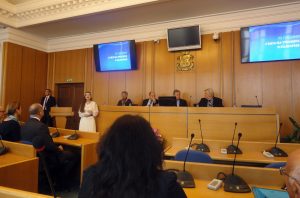 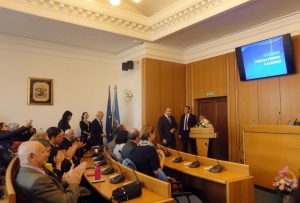 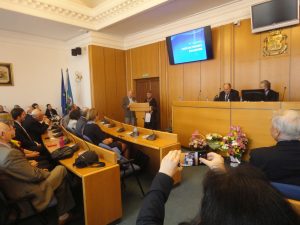 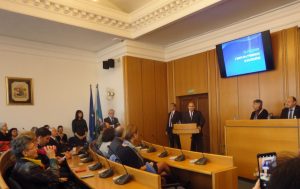 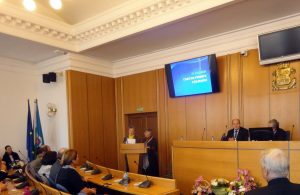 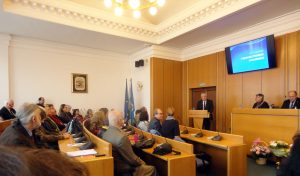