The VIII International Scientific and Educational Forum of Young Scientists (translators and teachers of the Russian language) «Languages. Cultures. Translation» took place on September 19–24, 2021, in Komotini, Hellenic Republic. The Forum was organized by the Higher School of Translation (Faculty) of Lomonosov Moscow State University http://esti.msu.ru/ with partial financial support of the Russian World Foundation https://russkiymir.ru/, as well as with the assistance of the Russian Academy of Education (Russian Federation) http://rusacademedu.ru/ ,  ANO Institute of Translation (Russian Federation) https://institutperevoda.ru/ , Russian Language and Russian Culture Center (Russkiy Mir Foundation) of Democritus Thracian University (Komotini, Hellenic Republic), Languages, Literature and Culture departments of the countries of the Black Sea basin of the Faculty of Humanities Studies of the Democritus Thracian University (Komotini, Hellenic Republic).

The Forum of young researchers is an important annual international scientific and educational project aimed at providing scientific and methodological support for education and communication in Russian abroad in the digital age, improving the methodology of teaching Russian as a foreign language, strengthening the position of the Russian language as a means of international and interethnic communication, as well as promoting Russian culture abroad.  From the very beginning of the project (2013), special attention has been paid to the exchange of experience of Russian beginner researchers with foreign colleagues in the field of Russian language, Russian culture and translation. Educational concept of the Higher School of Translation (Faculty) of Lomonosov Moscow State University is based on a deep understanding of the need to improve foreign and Russian students’ knowledge of the Russian language for professional and daily communication. All educational and scientific events occupy a central place in the Academic Policy of the Faculty.

Professor Nikolai Garbovsky, Director of the Higher School of Translation of Lomonosov Moscow State University, made a speech at the opening ceremony of the forum, which was held at the Komotini City Music School, who congratulated the forum participants on the start of work and noted the importance of holding events aimed at spreading the Russian language and Russian culture.

Professor Haratsidis Eleftherios, Director Russian Language and Russian Culture Center (Russkiy Mir Foundation) of Democritus Thracian University in his welcoming speech, pointed out the high importance of such an event aimed at strengthening the position of the Russian language in the world space, and wished the participants fruitful and interesting work.

Consulate General of the Russian Federation in Thessaloniki https://saloniki.mid.ru/ru/  sent a welcome letter to the organizers, participants and guests of the forum. In his message, Consul General Mr. V.D. Maistrenko stressed that such projects are very important, as they develop the creative and intellectual potential of young people.

The work of the forum began with a musical and poetic composition «The Soul of Russia in music», prepared by students and teachers of the Higher School of Translation.

Scientific meetings were held within the framework of the forum, which allowed discussing a wide variety of problems of translation theory and practice, methods of teaching Russian as a native and as a foreign language, issues of interaction and mutual enrichment of cultures. Discussions were conducted in the following areas: Russian language in the system of training specialists in interlanguage communication; translation in the modern world; cultural and anthropological aspects of interlanguage communication; Russian literature in translations into the languages of the world.

In addition to master classes, round tables and lectures, the forum participants were offered creative workshops («The Splendor of Russia’s Artistic heritage», «Acquaintance with Russian Miniature painting»), organized by Maksimovich V.F., Guseva P.V. and Lapshina E.A. (Higher School of Folk Arts (Academy), St. Petersburg, Russian Federation). Classes in creative workshops allowed the students to get acquainted with the features of the Palekh lacquer miniature painting on papier-mâché and to make small boxes with tempera paints based on egg emulsion with the image of a Firebird – a literary character of a Russian fairy tale.

The translation workshop «Fundamentals of Translation semantography» was conducted by a teacher at the Higher School of Translation (Faculty) of Lomonosov Moscow State University Serkova S.E. During the classes, the forum participants got acquainted with the basic rules of translation semantography and tried themselves as simultaneous interpreters of an international conference. During the work of a creative workshop dedicated to film translation, students got an idea of the basics and some of the subtleties of this type of translation, learned to distinguish genres and plot moves, acquired the skills of text compression without losing important information, and also tried themselves as professional audiovisual translators and even voice actors.

Foreign students studying Russian actively participated not only in lectures and master classes, but also in intellectual rings, linguistic quizzes, as well as interactive games, where they could check how well they were familiar with Russian literature and painting, as well as Russian traditions and customs, Russian proverbs, sayings and phraseological units.

All participants of the forum «Languages. Cultures. Translation» agreed that this international project contributes to strengthening the position of the Russian language abroad in the digital age, the development of joint educational and scientific projects, as well as the search for new ways of intercultural communication in the global world. 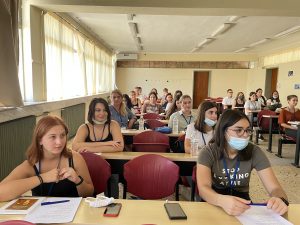