Примите участие со статьей
You are here
Home > Chronicles > INTERNATIONAL TRANSLATION DAY – SEPTEMBER 30, 2021 ON THE 30TH ANNIVERSARY OF THE UNION OF TRANSLATORS OF RUSSIA

Recently, on September 17-22, 2021, O. Ivanova took part in the Anniversary Conference of the New Bulgarian University «Business Communications, Language, Literature and Culture», St. Constantine and Elena, Varna, Bulgaria. Her speech consisted of two parts: in the first part she told about the history of the creation of the UTR, in the second she presented the history of national translation in Russia, defining the main task of the Union – the preservation of the languages of Russia through translation.

At the opening of the meeting, the song «Translator» by Mikhail Zagot, a member of the UTR and the Union of Writers of Moscow, was performed https://www.youtube.com/watch?v=lRMMGaKgnqI. A company postcard of the UTR on the occasion of Translation Day with the image of St. Jerome, the Patron Saint of translators, created by the director of the school Aleksanr Gabrielyan, was presented.

Memories of the history of the creation of the Union of Professional Translators were listened to with great interest. Leonora Chernyakhovskaya spoke about the creation of summer translation schools. Evgeny Maslovsky, the author of the English-Russian dictionary of a personal computer user, 1992, commented on the film about translation schools and familiarized the participants with the preparations for the opening of the Museum of the History of the UTR. Olga Ivanova thanked the speakers for their contribution to the creation of the Union.

The thesis «“The Last flight“ Andre Maisse – How I translated this novel» was presented by graduate Olya Poplavskaya. In her work, O. Poplavskaya compares her translation with that of L. Gurevich (Maisse A. The Last Flight: a biographical novel about the writer and pilot A. de Saint-Exupery, trans. from french Leonid Gurevich. – Orenburg, 2014. – 237 p.).

The welcoming speech was delivered by Rade Vojvodic (Belgrade). On behalf of the Bulgarian translators (Union of Translators of Bulgaria https://www.bgtranslators.org/) Dimitrina Lesnevska  – editor-in-chief of the International scientific journal «Russian Studies without Borders» http://www.rusistikabg.com/ congratulated the participants of the meeting.

At the end of the meeting, Olga Ivanova presented new projects of the UTR dedicated to the 30th anniversary of the Union. Irina Voskresenskaya spoke about the project of creating a Linguistic landscape of Russia (foreign signs on Russian streets). Tatiana Golikova presented her «Linguoculturological dictionary of borrowings of the modern Russian language 2010-2020, Direct Media, 2021, 496 p.».

Alexander Polikarpov spoke about the events on the translation of the languages of the peoples of Russia. Educational projects of the UPR were presented. At the end of the meeting, a poem by the Tatar poet Gabdulla Tukai «Russian language» (tat. «Tugan tel») in Tatar and Russian was read out. The festive meeting was rich and interesting. 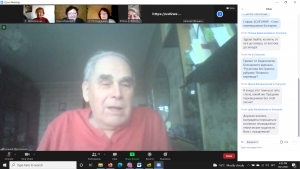 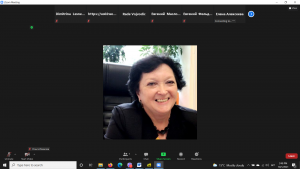